NOTE: This version of Carl von Clausewitz's famous treatise On War is a complete version (i.e., it contains all eight books—most on-line versions have only the first four) posting of Colonel J.J. Graham's translation published by Nicholas Trübner in London in 1873. It is derived from the German original, Clausewitz's Vom Kriege (Berlin: Dümmlers Verlag, 1832). The 1976/84 Howard/Paret translation from Princeton University Press is the standard English translation today; for the most accurate text one should always consult the Otto Jolles translation, originally done in 1943 at the University of Chicago. For more information on the original German text and on all of the available English translations, click HERE. Please take a look at the relevant books shown below. For a general discussion of the various versions of Vom Kriege/On War available, see ClausewitzStudies.org, "Which Translation of Clausewitz's On War do you have?" For an advanced and rather complex discussion of some important problems with all of the English translations (including Graham's, H/P's, and Jolles'), see Christopher Bassford, "Clausewitz's Categories of War and the Supersession of 'Absolute War.'"

Carl von Clausewitz and Arthur Wellesley, First Duke of Wellington, On Waterloo: Clausewitz, Wellington, and the Campaign of 1815. Ed./trans. Christopher Bassford, Daniel Moran, and Gregory W. Pedlow (ClausewitzStudies.org, 2010). ISBN: 1453701508. This book is built around a new and complete translation of Clausewitz's study of the Waterloo campaign (Berlin: 1835), which is a strategic analysis of the entire campaign (not just the Battle of Waterloo), and the Duke of Wellington's detailed 1842 response to it. Clausewitz's Der Felzug von 1815 was written late in his life and its findings were never incorporated into On War, so most readers will find it new material.

Buy the best translation—recommended for serious readers. The Book of War (The Modern Library, February 2000). ISBN: 0375754776. Clausewitz's On War and Sun Tzu's Art of War in one volume. The translation of Clausewitz's On War is the 1943 version done by German literary scholar O.J. Matthijs Jolles at the University of Chicago during World War II—not today's standard translation, but certainly the most accurate. Sun Tzu is presented in the modern translation by Roger Ames, based on complete ancient texts found by archaeologists.

Buy the standard English translation of Clausewitz's On War, by Michael Howard and Peter Paret  (Princeton University Press, 1976/84). ISBN: 0691018545 (paperback). Kindle edition. This quite readable translation appeared at the close of the Vietnam War and—principally for marketing and copyright reasons—has become the modern standard.

Decoding Clausewitz: A New Approach to On War (University Press of Kansas, 2008). By Jon Tetsuro Sumida. ISBN: 9780700616169. *This is perhaps the most important recent book for anyone seeking to understand Clausewitz's thinking. Sumida contends that Clausewitz's central value lies in his method of reenacting the psychological difficulties of high command in order to promote the powers of intuition that he believed were essential to effective strategic decision-making. Sumida also correctly notes Clausewitz's argument that the defense is a stronger form of war, and goes on to explore the implications of that fact. 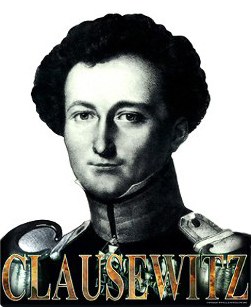 • "Clausewitz and His Works." A contemporary introduction by Christopher Bassford
(updated 2012)

• Preface to the First Edition by Marie von Clausewitz

• The Introduction of the Author

• Some Notes on This Translation

BOOK I: ON THE NATURE OF WAR

• 5. On Bodily Exertion in War

BOOK II: ON THE THEORY OF WAR

BOOK III: OF STRATEGY IN GENERAL

• 5. Military Virtue of an Army

• 2. Character of a Modern Battle

• 4. The Combat in General (continuation)

• 5. On the Signification of the Combat

• 7. Decision of the Combat

• 8. Mutual Understanding as to a Battle

• 4. Relation of the Three Arms

• 6. General Disposition of an Army

• 8. Mode of Action of Advanced Corps

• 2. The Relations of the Offensive and Defensive to Each Other in Tactics

• 3. The Relations of the Offensive and Defensive to Each Other in Strategy

• 6. Extent of the Means of Defence

• 7. Mutual Action and Reaction of Attack and Defence

• 18. Defence of Streams and Rivers

• 19. Defence of Streams and Rivers (continued)

• 24. Operating Against a Flank

• 25. Retreat into the Interior of the Country

• 29. Defence of a Theatre of War (continued)—Successive Resistance

• 30. Defence of a Theatre of War (continued) When No Decision is Sought For

SKETCHES FOR BOOK VII: THE ATTACK

• 1. The Attack in Relation to the Defence

• 2. Nature of the Strategical Attack

• 3. On the Objects of Strategical Attack

• 4. Decreasing Force of the Attack

• 5. Culminating Point of the Attack

• 6. Destruction of the Enemy’s Armies

• 10. Attack on an Entrenched Camp

• 15. Attack on a Theatre of War with the View to a Decision

• 16. Attack on a Theatre of War without the View to a Great Decision

• 19. Attack on the Enemy's Army in its Cantonments

• 22. On the Culminating Point of Victory

• 3.A. Interdependence of the Parts in a War

• 3.B. On the Magnitude of the Object of the War and the Efforts to be Made

• 4. Ends in War More Precisely Defined—Overthrow of the Enemy

• 6.A. Influence of the Political Object on the Military Object

• 9. Plan of War When the Destruction of the Enemy is the Object

• Index to the 1873 Edition of Graham's Translation of On War

Go to Table of Contents