Posted to The Clausewitz Homepage by permission of the editors of JMH.
See as PDF. 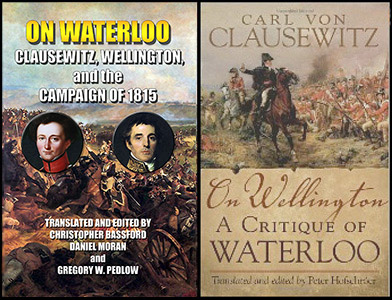 "Either of these volumes would be a welcome addition to the bookshelf of any serious student of military affairs, but On Waterloo: Clausewitz, Wellington, and the Campaign of 1815 is clearly the richer of the two."

The Prussian military theorist Carl von Clausewitz is best known for his seminal work Vom Kriege (On War), which is more widely read and hotly debated today than it ever was when it first appeared in the early-middle of the nineteenth century. But Clausewitz wrote a great deal more than On War, and much of that is still well worth reading.  Clausewitz died an untimely death from cholera in 1831, at the age of 51. For most of the preceding thirteen years he had been the director of the Kriegsakademie in Berlin. When he died his widow Marie undertook the massive project of organizing and editing his notes and his unpublished manuscripts, most of which were works in progress. The resulting ten-volumes of Hinterlassene Werke des Generals Carl von Clausewitz über Krieg und Kriegführung  (Posthumous Works of General Carl von Clausewitz on War and Warfighting) were published in Berlin between 1832 and 1837.

Most contemporary English-language readers are familiar only with the first three volumes of the Hinterlassene Werke, which comprise the eight books of On War. The remaining seven volumes consist of a series of campaign studies, most of which were not intended for publication. Clausewitz wrote them as personal exercise to develop his thoughts in preparation for writing On War. Volume 8, Der Feldzug von 1815 (The Campaign of 1815) was Clausewitz’s penetrating analysis of the Waterloo Campaign that brought the Napoleonic era to a close. Clausewitz himself was a direct, albeit not a leading participant in that campaign as the chief of staff of the Prussian III Corps.

The Campaign of 1815 was largely overlooked by English-speaking historians for almost 175 years, and there remains today much speculation over how much the British commander at Waterloo, the Duke of Wellington, might have had to do with that. In 1840 Wellington was given a partial English translation of the study made by Charles Jenkinson, Third Earl of Liverpool. Wellington did react negatively to some of what he read. He famously had once described Waterloo as, “the nearest-run thing you ever saw in your life.” It was also the only time Wellington had ever faced Napoleon directly, and he was always sensitive to suggestions that he had been too cautions during the campaign; that he had failed to provide promised support to the Prussian commander Gerhard Blücher at Ligny on 16 June; and that two days later Blücher nonetheless arrived in the nick of time to support Wellington at Waterloo and therefore was the real victor of the campaign.

In 1842 Wellington at the urging of Lord Francis Egerton wrote a detailed memorandum in response to Clausewitz’s Waterloo campaign study. It was the only serious analysis of the battle that Wellington himself ever wrote. The memorandum is somewhat defensive in tone, with Wellington at one point stating: “…we find the historians of all nations, not excepting, as we see, those of the British, too ready to criticize the acts and operations not only of their own Generals and armies, but likewise those of the best friends and allies of their nation, and even those acting in co-operation with its armies. This observation must be borne in mind throughout the perusal of Clausewitz’s History.”

Few generals of any age—especially the present—would fail to sympathize with Wellington’s lament. But Wellington apparently took the whole thing somewhat personally. In a letter to his private secretary, Lieutenant Colonel John Gurwood, Wellington wrote on 17 September 1842: “I am trying to finish the Memo on Clausewitz for Lord Francis. I will send it to you as soon as it will be finished. But I am really too hard worked to become an Author and review these lying works called Histories.” And in the postscript of a letter to Gurwood dated 4 October Wellington wrote of his memorandum: “I don’t mean that this paper should be published!.... I don’t propose to give mine Enemy the gratification of writing a Book!” Whether “mine Enemy” was a personal reference to Clausewitz or a more general reference to historians as a group remains a matter of interpretation, since Wellington certainly would have been aware that Clausewitz had been dead for some ten years.

Long overdue, we now have two English translations of The 1815 Campaign. One, titled On Wellington: A Critique of Waterloo, is by Napoleonic Wars scholar Peter Hofschröer. The other, titled On Waterloo: Clausewitz, Wellington, and the Campaign of 1815, is by a team of Napoleonic and Clausewitz scholars, Christopher Bassford, Daniel Moran, and Gregory W. Pedlow. The two translations do not read exactly the same, obviously. The translation of well-written German into well-written English is always an inexact science at best. Both translations, however, flow smoothly and convey not only the essential facts of Clausewitz’s study, but also the trademark subtleties we expect from any analysis by Clausewitz.

There is one rather curious difference in the translations. In both, Chapter 32 deals with the main events of the battle. In the Bassford-Moran-Pedlow translation that chapter is organized into three sections, with the third section covering the actions of Clausewitz’s own Prussian III Corps. In the Hofschröer translation, the III Corps actions are treated as Chapter 33. From that point on the chapters in the two translations remain one number out of sequence with each other until Chapter 43, which in the Hofschröer translation deals with the Prussian attack. In the Bassford-Moran-Pedlow translation the Prussian attack is Chapter 42, but there is no Chapter 43. A footnote in the table of contents explains, “There is no Chapter 43 in any version of Clausewitz’s campaign study.” From Chapter 44 on the two translations are synchronized again.

The main difference between these two volumes is the material other than Clausewitz’s study. In his short introduction, Hofschröer explains how Wellington became aware of the study; why he apparently felt compelled to respond to it; his “manipulations of the record” (p.6); and “His role in suppressing the publication of the English translation of Clausewitz’s account of the campaign….” (p.6)  Hofschröer concludes by saying, “It was simply not possible for Wellington to have kept the promises of support he made to his Prussian allies. He clearly resented the issue being examined, and since its revelation to English readers would have damaged his reputation, it comes as no surprise that Lord Liverpool’s translation of Clausewitz’s ‘lying’ work never saw the light of day in Wellington’s lifetime.” (p.29)  But Hofschröer’s argument seems to fall short when it comes to showing substantive evidence for Wellington’s “role in suppressing” the translation of The Campaign of 1815.

Bassford, Moran, and Pedlow take a much different approach. Rather than explaining what was in Wellington’s 1842 memorandum, they reproduce it in their volume, immediately following Clausewitz’s study. They precede the study with Wellington’s original short Waterloo dispatch dated 19 June 1815. They also include two letters that Clausewitz wrote to his wife in July 1815, immediately after the battle, plus some 25 letters written by Wellington and members of his circle between 1840 and 1842 discussing Clausewitz’s study and Lord Liverpool’s partial translation. (Liverpool omitted Chapters 1-7 and 48-58.) The result in this volume, then, is something closer to a direct exchange between two of the most famous soldiers in history. From reading both accounts, that exchange was not necessarily completely adversarial. Clausewitz most certainly was not attacking Wellington directly; rather he was attempting to conduct a dispassionate technical analysis.

Bassford, Moran, and Pedlow each offer commentaries on the battle, Clausewitz’s analysis, and the differences between Wellington and Clausewitz, but the emphasis remains on the two central figures speaking for themselves. Furthermore, this volume links to the ClausewitzStudies.org website, which includes the original German text of the study, Lord Liverpool’s original partial translation into English, and full color reproductions of the maps in a Prussian General Staff atlas that Clausewitz referred to throughout the study.

Either of these volumes would be a welcome addition to the bookshelf of any serious student of military affairs, but On Waterloo: Clausewitz, Wellington, and the Campaign of 1815 is clearly the richer of the two.